How to tell if you're a douchebag, or: telling people they're racist or sexist is NOT COOL YOU GUYS 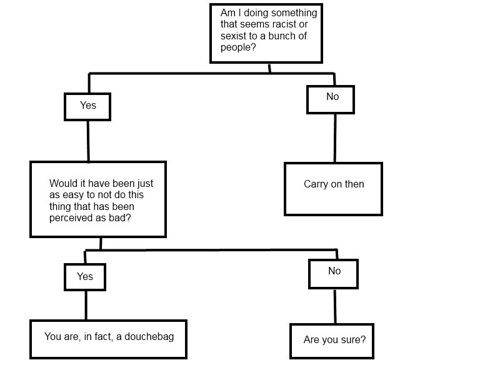 This post from Kate Harding on Sandra Bullock, Jesse James, and the horror of accusing white people of being racist reminded me of my Unified Theory of Douchebags, as illustrated (shoddily) above.

In fact, the consequences of accusing a nice white person of racism, falsely or not, are so unspeakably terrible — why, some people might think poorly of her! — it would probably be better if we never used the word “racist” at all, except with regard to people who do, in fact, personally want to commit genocide. Just to be on the safe side.

And if that means we can never really confront racism when we see it, well… that’s unfortunate. But come on. We don’t want to make people uncomfortable. White people, I mean. I understand that racism itself tends to have damaging effects on everyone else, but since I’ve never personally experienced it, I can only speak as a white woman — and let me tell you, being told that something you’ve done as a well-intentioned, liberal white person was, in fact, racist? AWKWARD! So before you go trying to end oppression, you should probably take that into consideration, okay?

Yeah!  You can't just flagrantly throw stuff around like that!  Sandra Bullock is nice, and this whole thing can be explained away, because saying mean things about her or her douchey ex is mean!  You can't just go around calling white people racist willy-nilly!

So, my theory is that if you're doing something a bunch of people say is a bad thing, and you could just as easily NOT do that bad thing -- you are a douchebag.  With whatever other word needs to be attached to that -- racist, sexist, anti-Semite, ableist, whatever.

I find it's easy NOT to use the word "retard", dress like Hitler, describe someone as "bigblack", or make rape jokes.   It really is!  I often do not make jokes about women's poor driving abilities, call people lame, and call black women "sistah"!  Many times in the day I don't do these things!

It really is not that difficult to just avoid looking like a jerk -- or, if you fuck up and look like a jerk, say: "I fucked up! I'm not going to make up 400 bad reasons why I'm not a jerk, and instead do better next time!"  You could, you know, own up to the shitty thing you did, and learn from it, and work on being a better person.  Guess what?  Everyone needs to do this.  Me, you, my beloved grandmother, my brother, everyone.

So stop with the "it was just a joke", "you're too sensitive", "what are you, the PC police?", "I'm a member of X group and I don't have a problem with it", "I'm a nice person and I'm butthurt at you suggesting I'm not nice" and 400 other methods of trying to turn these things into something you don't have to feel bad about.

Perhaps, when you get the itch to make a rape joke, or say that Obama looks like a monkey, maybe you could just stop for a second and think: "Is this douchebaggery really necessary?"

I'll save you the trip through the flowchart -- it's not.
Subscribe